What No One Tells You About The First Trimester

So, I’m pregnant. I’m in my first trimester and we have just announced our exciting news to the world! I’m ecstatic that I am finally going to get to be a mum, but the last 12+ weeks (or 9 since I found out) have certainly presented me with some interesting findings…not all of them very fun.

With that in mind, and to help any other newly pregnant mums out there who might be freaking out right now, here are some of the things I’ve learnt about the first trimester of pregnancy which no one ever felt the need to tell me!

1. Feeling like you’re going to start your period is totally normal!

This was one of my most unexpected symptoms during my first trimester and it wasn’t one I was prepared for. Looking back, pretty much from the week I got pregnant I had seriously painful period style cramps on and off (more on really).

During that first three weeks I just put that down to my normal pre-period ritual of pain, but after I found out that I was pregnant I began to really worry. Did the cramps mean I was having a miscarriage? Did I need to go to my doctor? Was I just imagining the 25 positive pregnancy tests and my period was about to start after all?!

The questions were endless. It turns out however, that period-style cramping is totally normal in early pregnancy, and thought in fact, due to the implantation of the embryo and as your uterus grows to make room for your baby.

However, if the pain becomes extreme or is accompanied by bright blood it is time to seek medical help, and personally, I don’t think there is any reason not to seek reassurance from your doctor if you’re worrying at all. Just know that those cramps you’re feeling are more than likely totally normal, and they’re probably not going anywhere any time soon.

2. You will turn into a pregnancy test hoarder

Well, you might not…but I did. It was about a week after we found out I was pregnant that Rob turned to me and asked me, very nicely, if we could maybe throw away some of my used pregnancy tests because they were making it hard for him to access the bathroom drawer.

This was the moment I realised I might have gone overboard, but it was also very much a ‘sorry not sorry’ moment. After my first positive test, I took three more that day to confirm, which I think is fair enough.

I was pretty sure at that point that the tests weren’t lying but it’s hard to believe you’re actually getting the one thing you’ve been wishing for so long. So, over the course of the next week I took around 6 more tests, just to make sure that a) they were still positive and b) the lines were continuing to get darker. The final test I took, after another 10 or so,  was 6 days after I got a 3+ Weeks result on my Clear Blue test.

If that all sounds a bit obsessive to you, you’re completely right. I spent the first 6 weeks of this pregnancy as a bundle of nerves, convinced that due to my PCOS I would be guaranteed a miscarriage.

So I obsessed and I tested and I tested again and again, and whilst I totally admit that it was a bit extreme it was what I needed to do to give myself peace of mind at the time. As I told Rob when he questioned it…you don’t have to understand it but you do have to support it!

If you aren’t a crazy lady like me and don’t feel the need to test constantly, then that is wonderful. You will probably have so much less stress and your bank account will thank you.

However, if you are like me then don’t feel strange or alone or bad for testing like a maniac. We all deal with stress differently and when you’re a hormonal mess I don’t think anyone has the right to tell you what the right and wrong way to do it is! 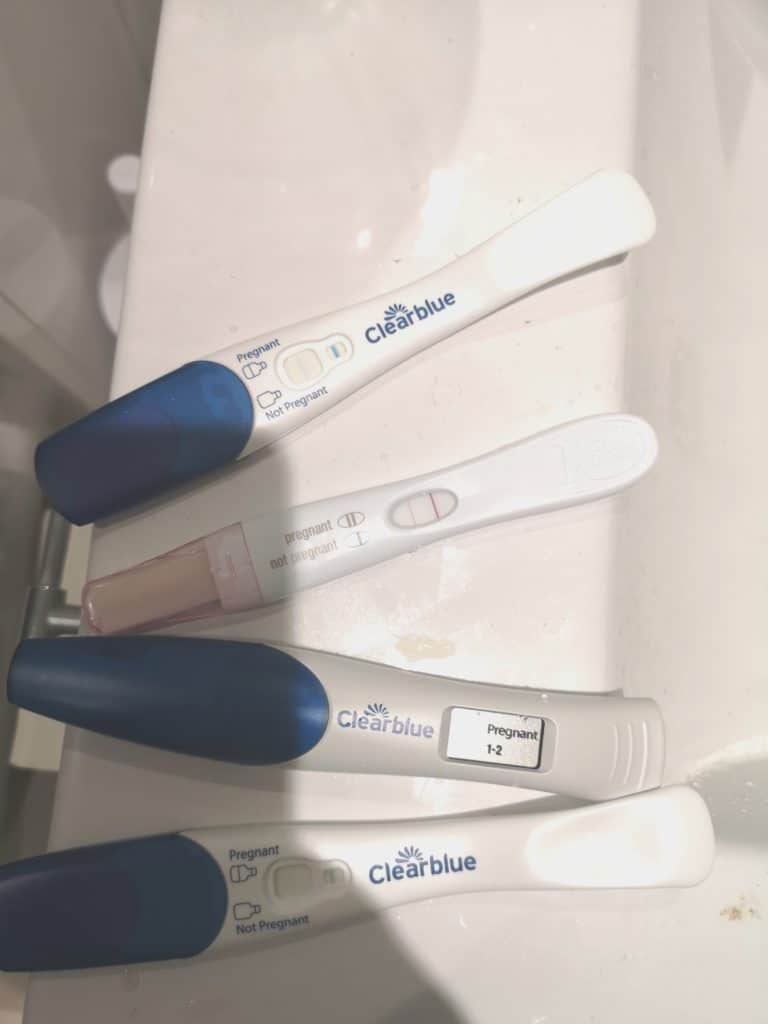 Call me naive but I had this strange idea that until I got a bump, my body wouldn’t start to change. I was wrong! Pretty much from day one, my boobs, nipples, skin, hair, muscles and just about everything else started showing signs of pregnancy.

Whilst everyone’s early pregnancy symptoms will be different, don’t get freaked out if your body starts to play up. For me, the worst physical symptom (other than nausea) was serious pain in my boobs, which was not only uncomfy and inconvenient but also worrying. You hear so many horror stories about boobs and pregnancy that it’s hard not to worry!

If that’s an issue for you, I suggest investing early in maternity bras (there is no such thing as getting one too early) and sports bras because they will make up most of your underwear for the next 9 months. There are lots on Amazon if you don’t feel ready to go into a maternity store yet!

These first trimester changes are, I’m sure, nothing compared to what I have in store in the next two, but many of them took me by surprise and I would have very much liked to have been warned!

4. Bleeding in the first trimester can be totally normal

Whilst I would urge you to get anything that doesn’t feel or look right checked out if just for your own peace of mind, it is true that some light bleeding can be totally normal during early pregnancy.

I’m not a doctor, so I’m simply going to share the NHS advice on bleeding in the first trimester with you. You can read the full article here. Of course, as it says below, bleeding could be a sign of miscarriage so please do have a conversation with your doctor if you’re worried!

In early pregnancy, you might get some harmless light bleeding, called “spotting”. This is when the developing embryo plants itself in the wall of your womb. This type of bleeding often happens around the time your period would have been due.

Pregnancy can cause changes to the cervix, and this may sometimes cause bleeding – after sex, for example.

During the first 12 weeks of pregnancy, vaginal bleeding can be a sign of miscarriage or ectopic pregnancy.

However, many women who bleed at this stage of pregnancy go on to have normal and successful pregnancies. 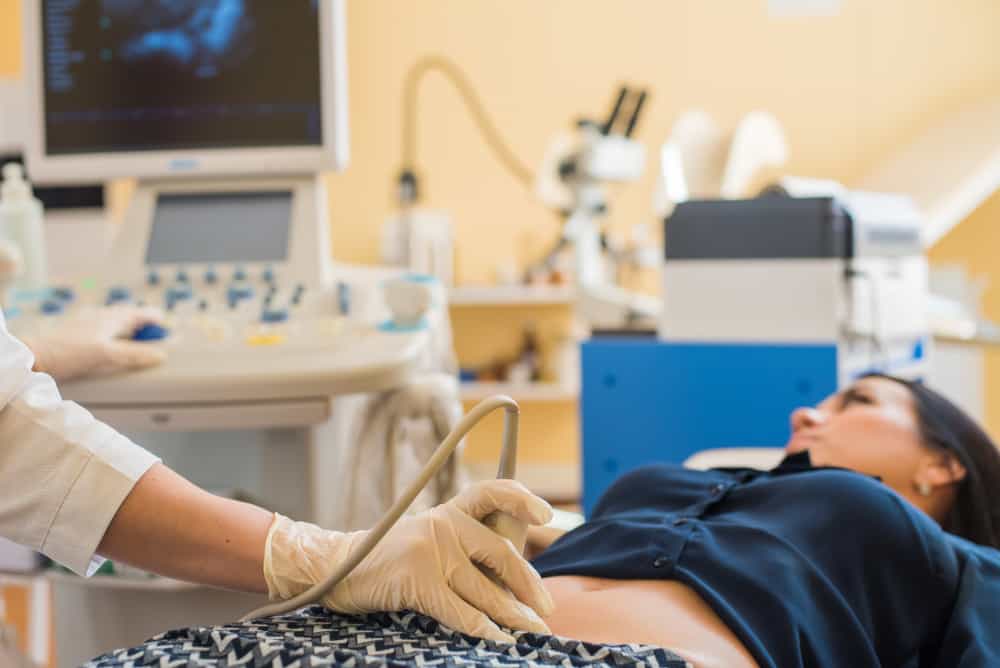 5. Finding out early is a blessing and a curse!

Finding out that you’re pregnant is easier than ever these days and happens earlier into your first trimester than ever before. Tests are more sensitive, we are more educated about the symptoms and if you’re actively trying to get pregnant then you’ll be more tuned in than ever, however whilst finding out early can be super exciting…it can also be difficult!

In the UK, unless you have a history of miscarriage or have been on fertility treatment, the earliest that you will see your baby or meet with your midwife is 10 weeks but often you won’t see anyone until 12 weeks! I didn’t have an NHS scan or a midwife appointment until 12 weeks and 2 days and having found out when I was just 3 weeks along, I can tell you it felt like an age!

If you’re in a similar situation and feel like you’re going crazy, trust me you’re not alone! I was so impatient that I ended up booking three early scans just to put my mind at ease and as much as Rob (my partner) thought I was being ridiculous I don’t regret that for a second.

It’s such a crazy time to be a newly pregnant woman…you don’t know what’s going on inside you and you often don’t even feel pregnant so finding ways to cope with the stress and pressure is essential.

Now that we’ve hit the 12 week mark though things feel like they went really fast and we can finally get excited, so no matter when you find out just take a deep breath and do what feels right for you and your new baby!

6. If you want to tell people…you can!

Perhaps one of the first things you’ll think about once the initial excitement wears off is, “when can I tell people?!?” and I know it’s something that a lot of people agonise over.

The tradition is, of course, that you don’t announce until you’re past the 12 week danger period (almost the end of your first trimester)…but I’m calling bullshit on that rule! Don’t get me wrong, if you want to wait until then to announce to the world and its wife, or to tell anyone at all, that is entirely your prerogative, but please don’t feel judged or bad for telling people beforehand.

We told our immediate family the day that we found out, so I would have been about 3 weeks along, and our close friends and extended family found out in dribs and drabs over the next few weeks.

Our reasoning for this was that we were telling the people that we would tell if we had a miscarriage. Miscarrying a baby is nothing to be ashamed about, and you shouldn’t feel the need to keep in a secret just to spare other people some tricky emotions if it happens!

Like I say, if you do want to wait, then wait…but if you want to shout it from the rooftops early on then go ahead! We did wait until past 12 weeks to do any social media announcements because just as we would tell our family and friends if I had miscarried, we probably wouldn’t post it on Facebook.

However your first trimester goes, whether you feel great or spend the entire time in bed or wrapped around the toilet, I have one piece of advice having just gone through all of it…

This is your pregnancy, it’s your body and it’s your life, which means that it is down to you to take charge. Call your doctor, push for blood tests if you think you need them, tell the world if you want to.

Don’t let anyone, no matter how close they are to you, dictate how you experience the first trimester! Listen to your doctor, eat healthily, start exercising and be positive, but do not let anyone make you feel ‘less than’ for experiencing what you are going through!

Positive Things To Say To a Pregnant Friend

How have I only just discovered that scrunchies ar

What has two thumbs and actually decided to make a

The pure joy that this child experiences from the

Sunny days, picnic in the park and the best side k

What No One Tells You About The First Trimester

Why Every Mum Needs Mum Friends

madetomum
5 shares
We use cookies to ensure that we give you the best experience on our website. If you continue to use this site we will assume that you are happy with it.OkPrivacy policy